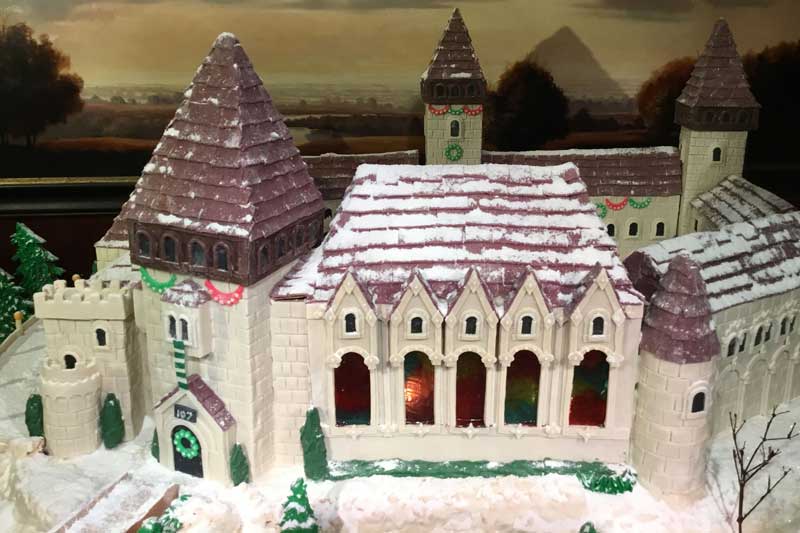 There’s a chill in the air, but at The Benson Hotel, we’re just getting warmed up for the holidays! It won’t be long before it’s time to celebrate The Benson’s 48th Annual Gingerbread Unveiling!

Mark your calendars for Monday, December 2 at 4 p.m. for the big reveal, featuring live holiday music, cookies, cocoa, and even a special appearance from Santa Claus! Although the theme of the grand gingerbread masterpiece is always a surprise, here’s a hint: This year it will be a replica of a Portland landmark featured in our new Historic Stairwell! This popular, traditional event is free to the public and welcomes visitors of all ages.

For the past 27 consecutive years (including this one), pastry chef David Diffendorfer has meticulously crafted the The Benson’s gingerbread masterpieces. Each year, depending on the subject, the “houses” require 100-150 pounds of gingerbread, roughly 50 pounds of marzipan and many hours of work and imagination.

The recently unveiled Historic Stairwell in The Benson is a 12-story original marble stairwell appointed with precious city history and the accomplishments of Benson Hotel founder and designer Simon Benson alongside hotel architect A.E. Doyle. The Historic Stairwell features more than 50 famous Portland landmarks, with photos dating back to 1847. From hotel ephemera and citywide photos to fun facts about the Rose City, the soon-to-be-unveiled gingerbread masterpiece is just the first stop anchoring 12 floors of Portland’s “storied” DNA.

The Benson, a historic downtown Portland hotel, has long catered to celebrities, CEOs, dignitaries and nearly every U.S. president since William H. Taft. It offers guests 287 tastefully appointed guest rooms, including a variety of suites, 18,000 square feet of meeting space and abundant guest amenities. Whether you are traveling for pleasure or business, The Benson offers comfort, luxury and proximity to all Portland has to offer.